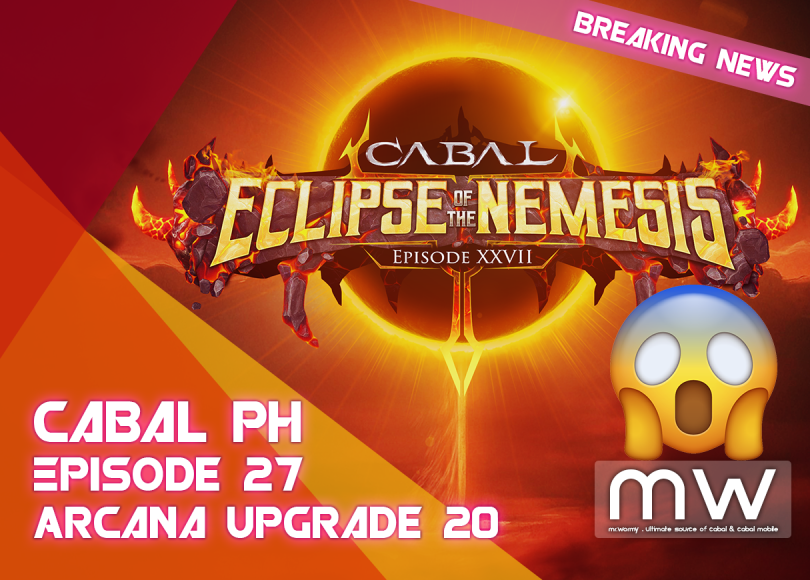 As the biggest and strongest Cabal Service so far by now, on 29-Apr-2021, Cabal Philippines just has received the latest patch named Eclipse of the Nemesis. The update features the Unique Grade of Force Wing (aka Wing 201 – 300), a new Force Wing Dungeon: Holia Kendrasil and the World Ruler Boss system.

All of these contents were introduced for Cabal Korea by Jul-2020. But out of nowhere, right from the patch notes, at the very last line, there is an easy-to-skip line “Arcana’s can now go up to +20“. What’s all about this? Is that a bug, or a new feature? As I have investigated and discussed with several news source, the upgrade limitation for Arcana has been lifted to +20 instead of +15. Are you wondering about stats, and success of these Arcanas? Take a look right here below:

The releasing of Arcanas upgrade is quite surprised for the whole Cabal community that this upgrade hasn’t been released anywhere else than Cabal PH even not in Cabal KR itself. These new upgrade level for all 3 types of Arcanas would open a brand-new era of Cabal, with the support from those mighty Chaos Items during adventures accrossing the Nevareth!

We also feel much surprised and honoured to be the first official Cabal service to get this special
part of update for Arcana upgrade!

by Representative of Cabal PH team

Find out more, here, at the Official home page of Cabal PH.

Stuck at airport between connecting flights, trying to do my daily run for Legendary Arena 😮‍💨😮‍💨😮‍💨
My love level for #Cabal. How about yours?
Me, checking the random road sign 🤔
Extreme Upgrade is a Myth 🤯🤯🤯
Yes! I knew it!
Double deal to celebrate your summer 🤔